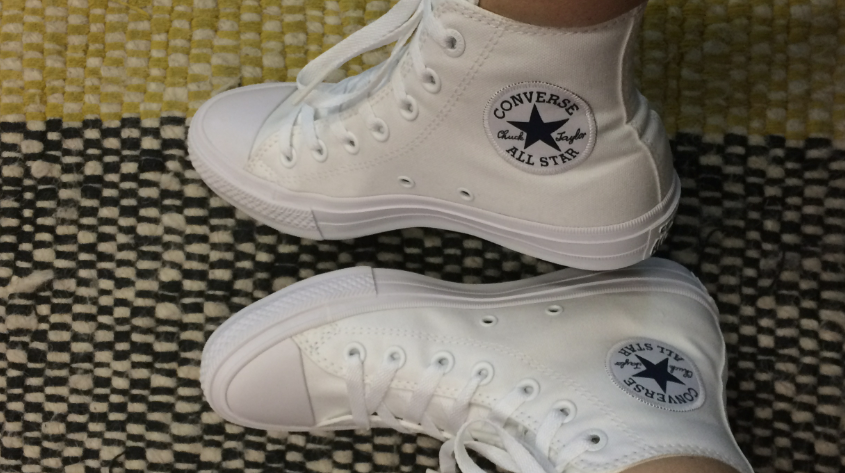 This week, Converse brought out the Chuck Taylor II, a new, revamped version of one of – if not, THE – world’s favourite trainers. But why mess with a classic, you might ask? I thought the same thing myself. So I got a pair on my feet so I could answer that very question.

What exactly is the difference between the Chuck Taylor II and your regular pair of Cons anyway? Well, the insole is different for starters; it has a Nike Lunarlon sock liner (and pretty comfy it feels, too. Bouncy, even). Nike bought Converse back in 2003, so they might as well make the most of its technology I suppose. Some of the trademarks have been tweaked – there’s no black line around the sole of the shoe, making them look modern and minimal, and the star badge on the ankle is now fully embroidered. Nice touch. Even the canvas is different, making them more durable and breathable. And the tongue is held in place with two pieces of elastic, meaning you won’t get that annoying thing where they slip over to one side. For the most part, though, this is a very sensitive update of a shoe that literally everybody loves. A bit like what all Star Wars fans are hoping JJ Abrams will do with The Force Awakens (geek alert!).

Anyway, I’ve gone off topic. Let’s get back to those shoes. Available in high top or Ox (low), they just come in four colours at the moment – white, black, red and blue. This is another nice touch, as when Converse All Stars first launched they were only available in black or white. Sometimes too much choice can be a bad thing. As you can see, I went for the white high tops (I find them more comfortable than the low Ox versions) because I can’t get enough of white sneakers at the moment. They go with everything, and I think the white Chuck Taylor IIs look the most different from the original Converse out of all the colours.
They do come up a little smaller than regular Cons, so you might want to go up a size (I did, to allow for socks). I’d love to know what you think of the new design. Leave comments below!